If you get up one more time than you fall, you will make it through

Hey lovelies!!
So I tried this recipe the other day that I got from this blog called Skinny Taste and it was so simple, so yummy, and so healthy!! It was Coconut Chicken Salad with Warm Honey Mustard Vinagrette  and it was SLAMMIN'!! I switched it up a little bit and added avocado since I didn't have cucumber and also added a little more dressing since I had some PointsPlus values to spare but the recipe as given is only 8 Points+ and super filling!

So you know I took my picture to compare and even though it looks nothing like it did on her website, it tasted just as delicious as it looked!! 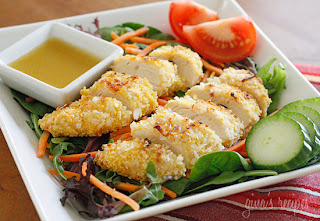 JUST KIDDING! lol I wish mine looked like that.. here's mine: 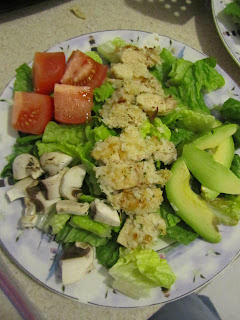 Not too shabby!! Anyway.. it's a must try!!
In other news.. I think my ankle is slowly but surely getting better! I skipped out on the Breast Cancer Walk today even though I really wanted to go.. but the Weight Watchers Walk-It Day 5K is coming up right around the corner and I really want to be in tip top shape for that! So my honey took my daughter out and I enjoyed some alone time! (which I obviously don't get too often.. so it was very nice)
You know how I always talk about NSV's and sometimes my NSV's tend to get repetitive but anyone who is losing weight should understand the emotions that I feel behind my journey and behind my success! One thing I love to do as a measure of my success is to compare pictures with similar poses from the past and the present.
So today I did just that and after about the 15,000th time I looked at the comparison, I burst into tears!! Losing weight is so stinkin' emotional for me on so many levels!! When people say "You should be proud.." .. you better believe I AM!!
Anyway.. enough with the small talk.. here is the picture:: 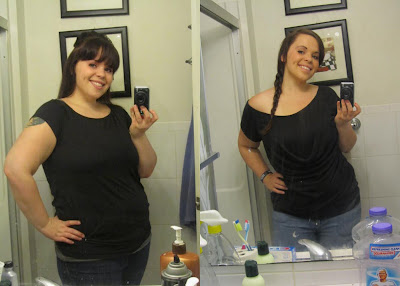 January 2011 Vs. May 2011
I can't even tell you how many times I looked at this picture and noticed every detail! From my waistline to my jaw line.. it's incredible to look back and think well geez.. when I posted the January 2011 picture, everyone said how great I was looking and now looking at the new picture, I can't help but wonder what I'm going to look like after I get these last 45lbs off!!! Excited for what the future holds!
I took a peek at the scale today..even though I promised I wouldn't. I wish I stuck to my promise. This has been a very rough week for me with not being able to work out like I usually do. It has made me feel lazy, dumpy, and most of all want to eat more! *sigh* .. I have been debating not weighing in tomorrow morning but I think I will anyway. If I gain then it just goes to prove that my old ways don't work for me.. being a couch potato is NOT AN OPTION!
Happy early Mother's Day to all the mommies out there!!! Have a blessed one!!
Love,
Krystle
"If you get up one more time than you fall, you will make it through"
-Chinese Proverb
Email ThisBlogThis!Share to TwitterShare to FacebookShare to Pinterest

GURLL!!! You look Auh-freakin-mazing! Check you out!! Recipe looks tasty, too!

I'm doin' the walk-it challenge too. I have feet and ankle issues, too. Just take it one day at a time.

Lmao again, you are to funny. always a pleasure reading your blogs. I havent had time to get to mine..