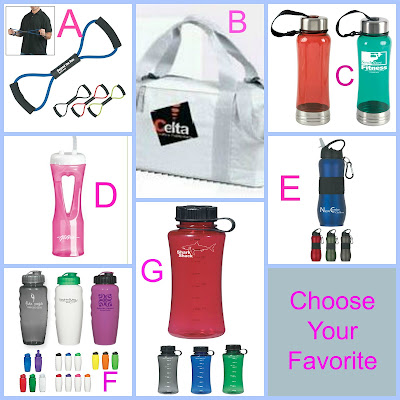 I am looking to get another "Dream. Believe. Achieve." product made that doesn't involve organizing sizes. We had a brainstorm session on Facebook the other day and a lot of you came up with water bottles, a few said gym bags, and a few said some other fun things. I narrowed down some ideas and I wanted to get your input.

See the images above, the descriptions below, and then vote at the bottom!

A: Exercise band is easy to store in a backpack, drawer, etc. for workouts any time, any place. Made of stretchable latex material with EVA foam handles.

D: Ergonomically designed heart-shapedgrip. When you are finished enjoying your drink, slip the end of the straw into the opening in the lid to help prevent spills. BPA free, holds 32 Oz. (A percentage of profits from the pink bottle sale will go the Susan G. Komen Foundation).  11.5" H x 3.5" W x 3.5" D

A little self reflection

I haven't really blogged in quite some time...I've done giveaways and guest posts and that sort of thing but I haven't spent time writing a genuine blog in a while.... I think it's time.

I get told often that the reason people enjoy my page is because I keep it real about the struggle .. I've always been 100% transparent when it comes to my journey and always will be. With that being said, I can't count on all my fingers (and maybe even my toes) how many times I have said to myself (and to you guys!) "I over did it tonight" or "I ate too much ______" and kicked myself for it, regretting my decision. I have NEVER been perfect on this journey.. I have slipped up more times than I can count but one thing I have been is CONSISTENT.....not consistent in that every day is great and every day I make all healthy decisions and workout. Not that kind of consistent. I am consistent in that every time I get off track, I get back on. Maybe not the next meal, maybe not even the next day... but I have never just QUIT. I have never said "oh well...messed this up.... might as well just forget it."

The other night I ate at the buffet... I did okay... not great, not terrible. Last night, as I mentioned on Facebook, I had a little too much pizza.... but as I zipped up that size 4 dress in the dressing room today with room to spare, I had to shake my head and laugh, which led me to this blog. 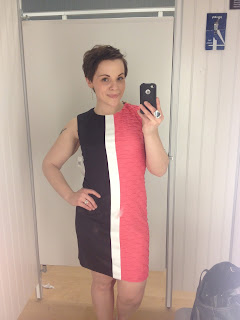 Want to know the answer?

I don't know how many times...

what I do know is that I have eaten more healthy foods in the past 2.5 years than I have in my life. I know I've burnt more calories in one workout than I used to burn in any given 6 months of workouts. I know that I am running laps around the old me that sat on the couch.  I know that my good days and my good food decisions have outweighed the bad ones by a long shot..... and while I'm on that topic, I am TIRED of referring to food as "good" and "bad" so this is the last time it's going down like that.

All I am trying to say is that I have kicked myself in the rear end more times than I can count - for WHAT?? ....Not sure the answer to that question but what I do know is that I am now learning to TRUST THE JOURNEY and working on.............. living.

NOT A DAMN THING.

I am Krystle Joy Bailey.
I am mommy.
I am KJB.
I am Skinny Jeans Dreams.

and I am worthy of being ALL of that and loving ALL of me ALL of the time. No matter what.

the same goes for y o u.
266 comments:
Email ThisBlogThis!Share to TwitterShare to FacebookShare to Pinterest

It's time for yet another giveaway. This one is definitely something that I put a lot of value on and is something I am doing out of the kindness of my heart... and my pocket... I'm sharing my Shakeology with you!

Two of you will win 3 single serving packets of Chocolate Shakeology to try out!

The only requirements that I am asking are that you are not a current Shakeology customer and not a Beachbody coach. So many people have experienced how amazing Shakeology is and what it can do for us - I want those who haven't had that opportunity to be able to try out Shakeology.

What is in it and why is it so "expensive

How can I win the packets?

You can win these Shakeology single serve packs by leaving a comment below about why you SHOULD win! The winners will be chosen at random but I will read all of the comments. :)

-KJB
145 comments:
Email ThisBlogThis!Share to TwitterShare to FacebookShare to Pinterest

Hey there!! I know I have been out of the blogging world for quite some time - Faceboook and life have been keeping me rather busy. I was approached by a women named Melanie who asked if she could guest post on my blog about the connection between fitness and cancer. Here is her write up, I hope you enjoy:


How Does Fitness Interact With Cancer?

From breast cancer to prostate cancer, all the way to mesothelioma, fitness has
been linked to helping fight a number of different cancers. While it is not a cure,
studies have consistently shown that exercising plays an important role in preventing
and fighting cancer. Scientists have found some correlations as to how fitness plays
into the equation and here are a few of these theories and what they might indicate.

One of the most important ways that fitness can help improve your general health is
by fighting obesity. Obesity has been linked to a number of medical conditions, and
those who maintain a healthy weight are far more likely to live long, healthy lives and
therefore have a lower risk of developing cancer. Some were skeptical about the link
obesity has to many different types of cancer, however studies have shown that the
effects that being overweight has upon the body as a whole, proves to make it more
difficult for your body to fight off infection. Obesity puts added strain on many of the
body’s functions and organ systems, which consequently makes it harder for the
body to be most efficient and therefore prevents the body from fighting cancer at its
optimum level.

Many researchers were surprised to find that high levels of physical activity
prevented cancer even when obesity is controlled for. While obesity reduction
certainly plays a role in fighting cancer, fitness does appear to have some additional
benefits. The exact mechanism of this preventative effect is unknown, but many
points have shown to link cancer and fitness. A few examples include improved
circulation, increased muscle strength, improved emotional state, and reduction in
developing other conditions such as heart disease and diabetes.

Chemotherapy is notoriously challenging, and most who suffer from cancer find it
to be the most difficult part of their fight. Again, studies have shown that fitness can
help ease some of the pain experienced. People undergoing chemotherapy often
find their energy levels drop significantly; fitness can help them maintain their energy
levels for a longer period of time. In addition, proper fitness can boost mental health
tremendously through the release of endorphins. Endorphins help to improve the
mood, which can help fight against the depression and anxiety that often comes with
chemotherapy.

Recovering from cancer will always take time regardless of the patient's fitness level
before undergoing treatment. Getting back in the habit of exercising regularly is
believed to help significantly. In addition, fitness has also been linked to a decreased

risk of recurrence. It will certainly take some time to reclaim lost energy, but those
who begin early can get on the road to recover quickly.