A Slew Of Things!!

and again, I'm okay with it. I wasn't at first, I can't lie. I was pretty bent out of shape and not because I gained this particular week but because I have been stuck in these same 4lbs for 2 months now. Because since the beginning of November I haven't been able to lose even 5lbs. But you know what changed? My fitness level. My measurements. My perspective on things. Which is why, that dag on scale can SHOVE IT!

As you know, I don't know how I would have gotten this far without my WW leader, Stephanie. She broke it down for my after I stepped off the scale upset. She asked me "What have you done, RIGHT?" and she proceeded to list everything I said and categorized them as POSITIVES. Then she wrote down "0.2. Negative" ...... You see the big picture??? I know I do!! 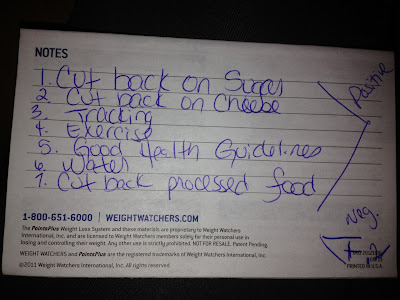 So ....onward!!
On a MUCH brighter note.....I HAVE BEEN HIRED TO WORK FOR WEIGHT WATCHERS!!!!!!!!! I found out yesterday and I am so beyond excited. Training will begin as soon as I get my paperwork and send it back. So happy to be on board with the WW team! I will start as a receptionist and when I get to and maintain my goal for a while, I will become a leader - God willing, as with all things.
FOODIE ALERT:
I love food. I love it in a much different way than I loved it in the past though. Now I love to see how GOOD healthy food can taste and see how well I can cook, have it taste delicious, and have it all be premium fuel for this engine. Tonight I threw down. 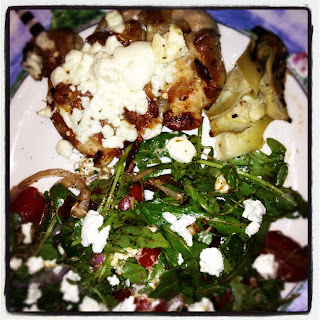 It was unnecessarily delicious and 7PP's for the entire meal!

I also tried vegan pizza the other day with spelt crust and DAIYA cheese. It was also pretty freakin' YUMMY! I didn't make this one though, I ordered it from VeggieGrille 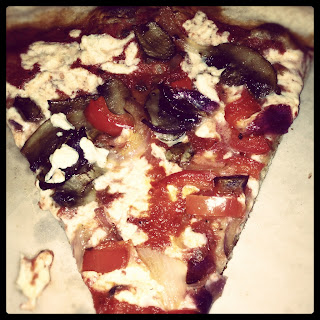 So after my meeting today, where I proudly announced that I can now do REAL pushups, I walked out and my friend in the meeting jokingly challenged me to a pushup contest so I non-jokingly said "right here, right now"
I posted this on my FB page earlier but I wanted to relay the message here. I love being healthy. I love being surrounded by health conscious people. But when I sit and think about it, there was a point in time that I believed I was a "healthy fat girl" because I didn't have diabetes or high blood pressure (Yet).
I believed that I must be okay because I had a boyfriend.
I believed that I was big boned and wasn't meant to be thin.
I believed that 200lbs was a "good weight for me".
I believed that Lane Bryant had cute clothes so there was no need to shop in other stores.
I believed that people who focused all their efforts on what they put in their mouth and how much they exercised were wasting their lives away and not enjoying life because "life was about food".
I believed so many things.
So many lies.
It's hard to fathom that this SAME BRAIN was capable of thinking those thoughts. They're the lies that I told myself so I didn't have to make a change. The lies that I told myself so I felt accepted.
They're just that - LIES.
and I am SOOOOO glad that I have seen the light and know the truth. 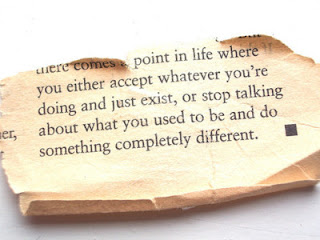 KJB
Email ThisBlogThis!Share to TwitterShare to FacebookShare to Pinterest

Amen to your statement that the doggone scale can shove it! (I'll admit it- at least a couple times a month, in the privacy of my bathroom, I give my scale the finger. I even occasionally curse it out, and I'm not a curser.) :)

I say that anyone who can do 20 "real" pushups can easily overcome a .2 setback. I'm still working on the real pushups, I can do 100 on my knees but always sputter out at 5 real ones. Congrats to you on rocking out!

Congrats on getting the job! I knew you had it in the bag!
I feel you on the frustration level with the scale, I'm beyond frustrated with mine, i keep going up and down with the same 3-4 lbs for the last month now and it won't budge, but I'm just working through it.

You are doing such a wonderful job my dear friend and that dang metal monster gets a little jealous from all the love you get and tries to trip us up from time to time! You ROCK and that point 2 is nothing. Look at your fabulous food choices and your physical strength and your skinny little waist and oh of course your Skinny Jeans :)

You know, this post was really inspiring to me. And that says a lot because I haven't been very inspired lately. I've been following your page amongst others on facebook, and I was all pumped to enjoy a healthy active life, when last wednesday I found out from my doc that because of health problems I can't exercise too much right now. It left me feeling like someone let the air out of my motivational balloon. But this post kind of brought me back to my previous mentality. Because even if I can't give it 100% right now physically, I have made progress towards my goal. I stopped eating sweets and switched to fruit. I stopped a 5 year addiction to cherry coke and replaced it with water. I stopped relying on processed junk and eat only nutrient full whole foods that my body loves me for. I quit using caffeine as a crutch for sleep deprived fatigue, sleep the same hours every night and drink coffee only in social situations. I lost 13 lbs in December and not a single ounce has come back. I stopped relying on quick fixes to keep my blood sugar up and I've stopped having spikes throughout my day. My body doesn't ask me to go back to any of that. I haven't needed to binge in two months. I quit all those nasty habits and even if I can't hit the gym right now, I feel 10x the person I was before. I'm no longer a slave to junk food. I took such a gradual and complex path to a better lifestyle, that right now I can't ever imagine going back to that. So thank you for your inspiring post. You've reminded me of how far I've gone. You've done such an incredible job so far, and you should be proud of yourself for touching people the way you have.

Congrats on the job!!!! and the food looks amazing. I keep going up and down on the scale too and I have absolutely no reason to y either. It gets frustrating but hey its .2 might just be water weight.

Glad to hear that!
www.hotmail.com