The Sum of Small Efforts

Man this has been a GREAT week!! I feel like lately I have been doing a lot of "Oh welll...tomorrow's a new day" kind of thing or Monday morning cleanups from the weekend but for the first time in a while I can say that this entire week has been ON POINT and I am sooooo looking forward to reaping the fruits of my labor on Saturday.
First of all, I haven't touched my weekly points allowance. I have used like TWO of them. (Normally I use them all by the time Monday rolls around). I have been so focused every single day. Then I have been back to working out since Tuesday. I hit the gym Tuesday for a while, I did Turbo last night, and had a KILLER run/stair climb with my sister in law. Who knows what tomorrow has in store!

Anyway, I want to talk about today. It was just a really, really great day and everything I have been working for the past 20 months basically was put on a pedistal as I sat back and thought to myself  "Kudos, Krystle. Kudos. You worked for this "

1) This morning my sister in law and I went for a run. We started out with no plan in mind and with barely breaking a sweat, jogged a mile. Then kept going. We got to the Taj Mahal and I challenged her to a stair climb suggesting that we climb the steps 10x up and 10x down. (360 steps each way). We killed it. 1.4 mile jog bag. I had to take a few walking breaks on the way back but at the end we sprinted as fast as we could and I pushed to the point that I felt like I was going to throw up - Yes, I am proud of that.

2) We decided to go to the pool at The Golden Nugget after our run. I took the day off to spend some time with relaxing with her. I put on my bathing suit that shows more skin than I have ever shown in public. While that alone, is an NSV, laying there after my run proud of how I look and not feeling self conscious was the greatest victory of all. I felt like everything I had been working for for so long was out in the open for the world to see and I was PROUD! 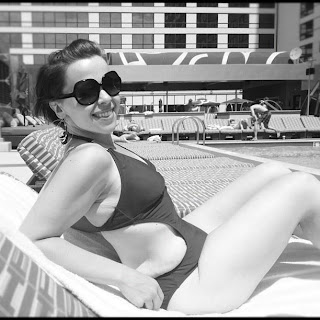 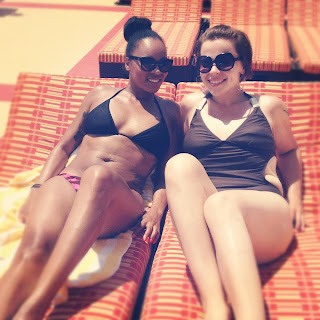 3) In a very non-judgemental way, I noticed that there were several very over weight people around at the pool and I watched their mannerisms remembering how uncomfortable I was in the not so distant past in my own skin. The self conscious feeling. The uncomfortable heat. Then I remembered how I was feeling right then in that moment and it solidified for me where I was never going back. I never want to be on the other side of the "world" again. Sadly, that's how it feels. When you have experienced both sides of the spectrum, they feel like 2 different worlds.

4) We went to lunch after the pool and I was so focused. I really wanted pasta and chicken. I didn't feel like just veggies. I felt nutrient deprived so I opted for a more hearty meal. So I asked if they had a whole wheat pasta option and ordered a dish with grilled chicken on top but asked the waitress to please ask the kitchen if they could measure out one cup of pasta for me. They did! When it came out, I split the dish down the middle, ate half, and walked away feeling so satisfied and so in control.

5) The whole notion of "Eating to live, not living to eat" has finally begun to take root in my brain and if you ask me, that's the key to this whole thing. Once you have that, you're in the money. The seed still needs lots of TLC and some watering but it's beginning to grow roots in this mind of mine and I am certainly happy about that!!

6) I worked a Weight Watchers meeting tonight and since I hadn't sent my monthly employee weigh in yet and it is due tomorrow AND since my territory manager just so happened to be there, I decided to weigh in and send it with her. I was hoping it was just slightly lower than my last Saturday weigh in since I normally weigh in in the morning and this was 6:00 at night. WELL.....last Saturday I was 2.2lbs away from goal. TONIGHT - 0.4lbs away from GOAL!!!!! Official weigh in is Saturday so I can only hope that the scale agrees!!! I had the BIGGEST party in my head I couldn't focus on anything else!

7) Came home on top of the world. My honey ordered those wings that I made him keep away earlier in the week and they didn't even tempt me in the least. I'm so focused. So on plan. So determined!!!!!!!! 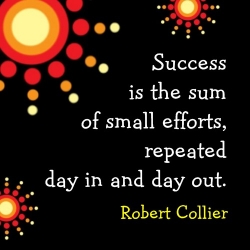 Your a great inspiration!! Btw you look awesome!! You go girl!!

SO SO SO MADE ME SMILE.

Love reading your blogs and it inspires me so much and keeps me going. Thank you!

great post! i can relate to a lot of it. i really admire that you can ask the server for specific measurements of food, i'm always nervous and shy about asking any questions about a meals.

Way to go! You are almost there. You should be very proud of yourself.

Way to go!!! You're such an inspiration! Great Post!!!

Oh, I can't wait to be on the other side some day. You look fabulous, congratulations on a super week.